Once considered radical, Black Lives Matter has gone mainstream. Republican Sen. Mitt Romney recently marched alongside Black, queer, elderly, and millennial allies to protest police brutality and racial injustice. Corporate giants have also joined the cause. Nike, Citi, and Walmart were among the first to hitch their brands to this new wave of antiracist action, joined daily by a growing chorus of business leaders pledging solidarity.

The modern movement for racial justice has been building for years, and it has reached a tipping point with the abhorrent murder of George Floyd and other acts of racial violence toward Black people in America. Black Lives Matter stands at the center of this movement, with a historic opportunity to stop police brutality and advance racial justice. What the movement’s leaders decide to do next will determine whether or not it takes a significant step forward toward changing policy and attitudes about race in this country.

While it’s not entirely clear who is “leading” the movement for Black lives, that doesn’t mean it is leaderless. Black Lives Matter “officials” only rarely appear on cable news or social-media news feeds. The three women who co-founded Black Lives Matter have not occupied center stage during these past weeks of extraordinary protest. To the average person, it might look like no one is “in charge.”

This strategy is intentional. From the start, Black Lives Matter was committed to being a “leaderfull” movement — leading from the grassroots up by allowing victims, survivors, and people with personal experience to speak out and stand at the front of protest marches. This was a smart decision. We know from our research that the most successful modern social movements embrace this leadership approach, understanding that it is both effective and protective. Without a sole charismatic leader, the movement is less vulnerable to attacks such as the tragic assassinations of civil-rights leaders in the 1960s, most notably the Rev. Martin Luther King Jr.

In addition to being “leaderfull,” Black Lives Matter shares traits with other successful social movements of our time, most notably marriage equality, antismoking efforts, and gun-rights expansion. The movement to advance racial justice and protect Black lives can deploy these same approaches to gain even more traction.

As the powerful protests against police brutality continue on the streets and in front of TV cameras, Black Lives Matter advocates and their allies are diligently working behind the scenes in decentralized but tightly woven networks to reform government policies at state and local levels. They are advocating, litigating, and negotiating for change in the places where policy and life collide — within each of the 50 states. They also are clearly tailoring their approach for each unique political system and cultural milieu.

Advocates for same-sex marriage focused fiercely on policy reform across the U.S. states,acting on what they dubbed their “10/10/10/20 = 50”vision for change. They adapted strategies for different regions of the country and set achievable goals for each state: Full marriage in 10 states; civil unions in another 10 states; same-sex-relationship recognition laws in 10 more states; and in the remaining 20 states, repeal of discriminatory laws against members of the LGBTQ community. This meant fighting to protect the first same-sex marriage law in Massachusetts and pushing for such a law in New York while advocating in Texas to repeal antisodomy and other discriminatory laws.

LGBTQ advocates ultimately won marriage equality nationwide in 2015 with the landmark Supreme Court ruling Obergefell v. Hodges, but only after decades of activism and advocacy in each U.S. state. Similarly, if Black Lives Matter advocates focus their firepower on state and local policy reform now, while they have the nation’s attention — and empathy — they can generate the momentum needed to eventually achieve nationwide changes. But if, instead, the movement pushes for sweeping federal changes too soon, they could squander this historic opportunity.

In this time of extraordinary racial reckoning, public attitudes toward race and police brutality are rapidly shifting. The latest Civiqs polls show that the number of American voters supporting Black Lives Matter grew from 46 percent to 53 percent following George Floyd’s murder. This attitude shift was triggered by the millions of advocates and allies demonstrating on U.S. streets and worldwide, and likely by the use of police and military force ordered by President Trump and some state and local officials against mostly peaceful protesters.

Pop culture has also influenced attitudes about race at a more accelerated clip in recent years. TV series like Blackish, movies such as The Hate You Give, documentaries like 13th, and books such as The New Jim Crow have worked their way into the conscience of a growing number of Americans. But pop culture alone cannot change social norms about race or reverse the racist attitudes of people who commit violent and hateful acts toward Black people — and who aren’t watching these films or reading those books. Racists subscribe to a separate canon of content that informs and reinforces white supremacist, xenophobic, populist, and other views.

Racism is a social norm, a cultural attitude, a personal opinion. It cannot be legislated or regulated. But it can be changed. Dismantling deeply rooted social and cultural norms is more challenging than changing laws or regulations. But it is possible, as the fight for marriage equality powerfully demonstrates.

In that movement, reformers deliberately set out to first understand where most people in America stood on same-sex marriage. National polls in the 2000s showed that although a handful of respondents were adamantly opposed to gay marriage, whether for ideological, religious, or other reasons, the vast majority did not have a strong opinion. They weren’t for it or against it. Many said they didn’t understand why gay people wanted to marry. So the Freedom to Marry campaign and its allies set out to convince this silent, if confused, majority of “persuadable” people to support their cause.

They deftly deployed social-norm-change campaigns centered on love. Social-media ads showed a lesbian couple raising a son in Massachusetts who was an ice-hockey state champion. Another profiled a straight uncle “coming around” to the idea of his nephew marrying his partner. The idea was to normalize the idea of same-sex partnerships and marriage.

Focusing on “love” was a departure from previous LGBTQ campaigns, which centered more on defending rights and protesting discrimination. Similarly, now that Black Lives Matter has earned the empathy of a majority of people in America, they can attract more allies to the racial-justice cause and turn that support into action in statehouses and at the voting booth.

Break From Business as Usual

Whether by choice or by default, companies today are becoming more involved with social movements, with seemingly every corporate CEO now speaking out against racism. This isn’t necessarily new, but it can make a difference in shaping cultural norms and attitudes — even when some of these efforts fall flat.

In 2015, following a racist incident at a Starbucks in Philadelphia, the company’s CEO, Howard Shultz, deputized his army of baristas to talk about race.  The campaign was quickly snuffed by the backlash to this ill-advised (if well-intentioned) idea. But it also put race squarely in front of the consumer, pushing the sensitive issue into more public view.

Long before Starbucks tried to strike up casual conversations about race over a cup of coffee, another leading brand broke ground on this issue in the 1990s. Timberland mounted the novel “Give Racism the Boot” campaign, running print magazine ads and tagging jackets in its stores with mini-booklets designed to raise customer awareness and discussion. The campaign content was designed in partnership with City Year, a national service organization with a long history of partnership with the company.

These approaches demonstrate how business can be a vector for change, not just a donor to causes or a target of activist ire. Companies play roles in social movements that are much more complex and far-reaching than self-promotional advertisements or corporate statements promising racial solidarity. Corporate leaders who want to demonstrate support with Black Lives Matter can start by reforming internal policies on hiring, retention, promotion, and pay equity, and reviewing their supply chain through a lens of diversity and inclusion, among other ways to take meaningful action against racism.

How Change Will Happen

Black Lives Matter and its allies are crossing a Rubicon in this moment of racial reckoning. What they do next can determine not just how Black people are policed, but how they are fundamentally viewed and treated by all institutions of society. Beyond protest and policy change, they can deploy success strategies of other 21st-century social movements to further bend the arc of history closer toward racial justice and lasting systemic change.

Leslie Crutchfield is the author of “How Change Happens: Why Some Social Movements Succeed While Others Don’t.” She teaches corporate social responsibility and nonprofit leadership at Georgetown University’s McDonough School of Business, where she serves as executive director of Business for Impact. 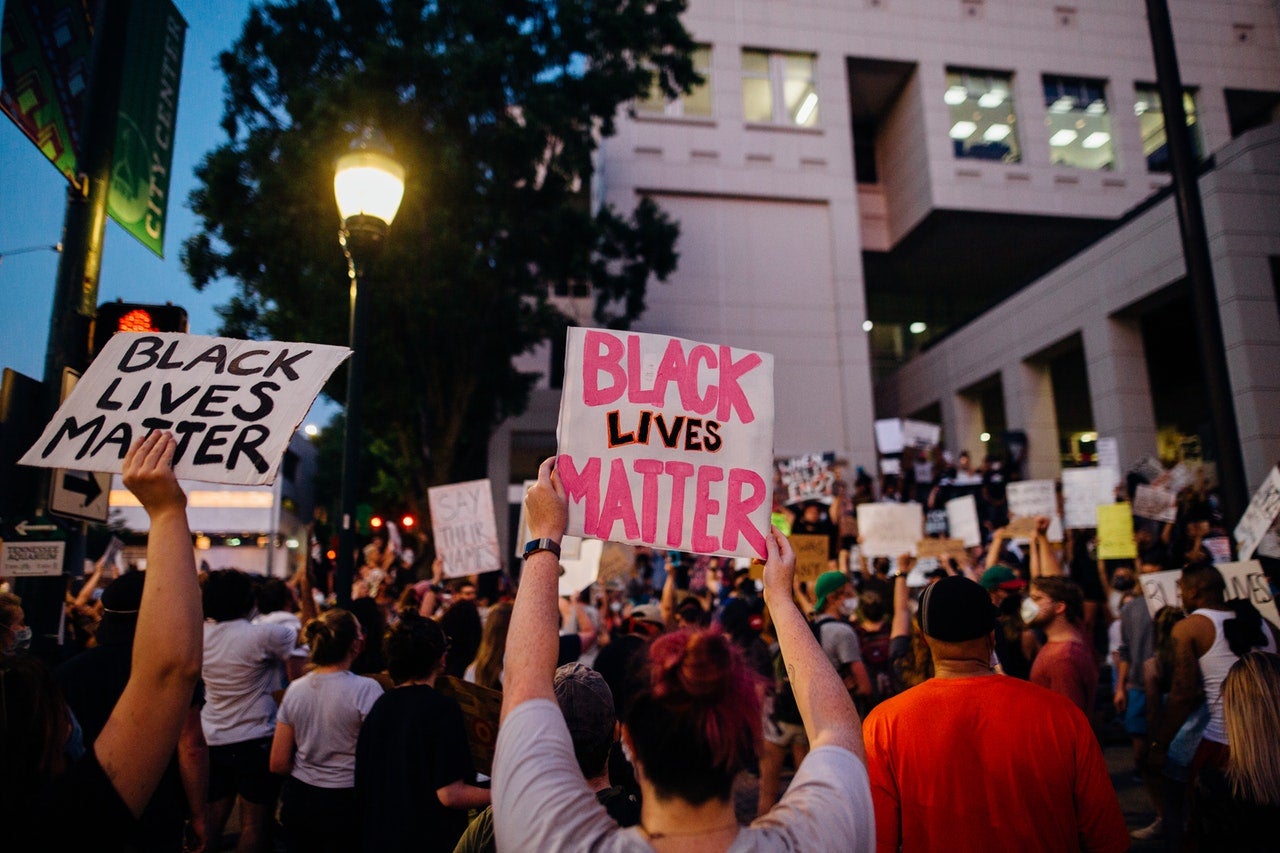